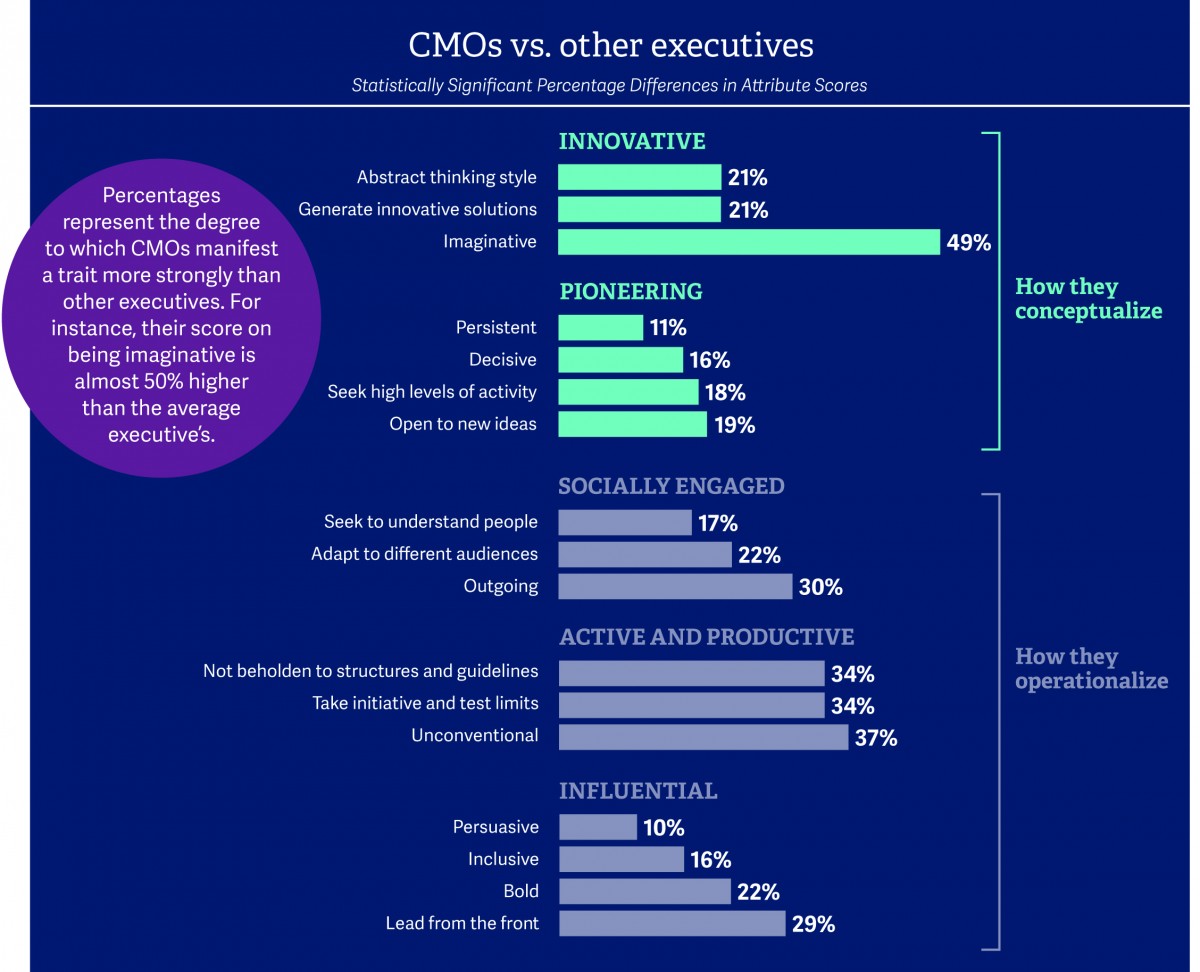 This article is a reblog and was originally published on Forbes by contributor John Ellett.

John Ellett's latest piece in Forbes explores new research on CMO psychographics. He discusses a recent study indicating that the very traits that make a CMO successful, such as imagination and thinking "outside the box," can at times put them at odds with their executive peers. Ellett goes on to make compelling suggestions on how organizations can harness the unique personality traits of marketers for company success. The full body of the post is below:

What makes CMOs great at their jobs is also the source of friction they often experience with their CFO peers. In a new study by the executive search firm Russell Reynolds, the attributes of “imaginative,” “unconventional” and “tests limits” make CMOs great leaders of transformation and growth initiatives. But these same attributes are dramatically different from most CFOs and may be the source of the relationship challenges CMOs and CFOs often face.

According to the report’s co-author Richard Sanderson, co-leader of Russell Reynolds CMO practice, “We asked a number of CMOs and CFOs to take an online assessment based on 60 psychometric and behavioral attributes and then compared the significant differences between the groups and other members of the C-Suite. What was really unusual about the CMO is they have the most extreme personality in the entire C-suite. For example, the attribute ‘imaginative’ is a description of someone who enjoys brainstorming and novel ideas. We see a high score as indicative of someone who is strategic in their thinking, willing to ‘think outside the box’ and embrace risk – the CMO profile. This is in stark contrast with the CFO style which is much more conventional and risk averse.”

Norm Yustin, Sanderson’s co-author and co-leader of the CMO practice at Russell Reynolds, added “We were fascinated that the level of differences between the CMO and the other members of the C-suite were so extreme. That is where some of the tensions can come from.”

The study also finds that some of the attributes may inhibit CMOs in their career progression to CEO. “Being  unconventional”, “eskewing structures and guidelines” and “displaying flashy leadership” are CMO attributes which are significantly different than most CEOs who are often more measured emotionally and are more calculated about taking risks. Sanderson elaborated, “The data here is interesting and almost paradoxical. The CMO shares many of the attributes as the CEO – bold, abstract thinking and outgoing. But the paradox exists in the extremity.  CMOs are so far out on some of these dimensions, that it is potentially harmful to them. For example, being imaginative is the one CMOs spike on which indicates their interest in thinking outside the box strategically. We’re not saying CEOs don’t think strategically. What we are saying is CMOs do it on such an extreme level that they may need to dial it back.”

How can companies take advantage of the significant differences of the CMO? The authurs suggested four things:

If you are interested in the full report, it can be found here.